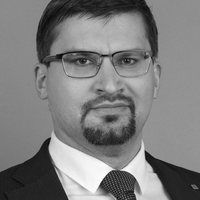 Biography
Dzmitry Tsetserukou received the Ph.D. degree in Information Science and Technology from the University of Tokyo, Japan, in 2007. From 2007 to 2009, he was a JSPS Post-Doctoral Fellow at the University of Tokyo. He worked as Assistant Professor at the Electronics-Inspired Interdisciplinary Research Institute, Toyohashi University of Technology from 2010 to 2014. From August 2014 he works at Skolkovo Institute of Science and Technology as Head of Intelligent Space Robotics Laboratory. His research interests include wearable haptic and tactile displays, robotic manipulator design, telexistence, human-robot interaction, affective haptics, virtual and augmented reality.
Presentations
Emerging Technologies
Emerging Technologies Presentations
SwarmCloak: Landing of a Swarm of Nano-Quadrotors on Human Arms