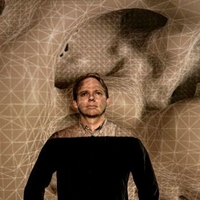 Biography
Baden Pailthorpe is a contemporary artist who works with emerging and experimental technologies. He is the Convenor of Hybrid Art Practice at the ANU School of Art & Design, Canberra. His artistic practice interrogates the relationship between aesthetics and power, interrogating the politics of technological and economic structures across Sport, Finance and the Military-Industrial Complex.