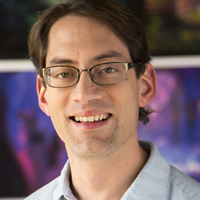 Biography
Ernest Petti is Studio CG Supervisor at Walt Disney Animation Studios. In this role he acts as a bridge between Production and Technology for long-term strategic initiatives, orchestrating the initiatives and projects of the Workflow team and uniting them to fit within the studio’s vision for workflow.

Prior to this he served as Technical Supervisor on "Ralph Breaks the Internet" (2018) and the 2016 Oscar-winning feature "Zootopia". Ernest joined Disney in 2000 as a software engineer in the Technology group and has served as a supervisor in Lighting, Look Development, and Tactics. Credits include 2014's Oscar-winning feature "Big Hero 6", as well as "Wreck-it Ralph" (2012), "Tangled" (2010), and "Bolt" (2008).

Ernest was born and raised in Cleveland, Ohio. He earned a Bachelor of Science in physics from John Carroll University and Master of Science in computer science from the University of Iowa. He lives in Burbank with his wife and three kids, puppy, and albino corn snake.
Presentations
Featured Sessions
"Frozen 2" and the Past, Present, and Future of Tech at Disney Animation