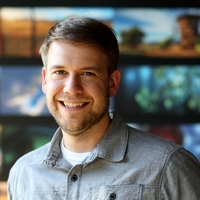 Biography
Jonathan Pytko joined Pixar Animation Studios in January 2004. He started as a lighting artist on “The Incredibles” and “Cars.” He worked in the lighting department on several Academy Award-winning feature films “Ratatouille,” “WALL-E,” “Up,” “Brave,” and “Coco.” Pytko is currently the lighting supervisor on Pixar’s upcoming feature film “Onward,” which is set to release in theaters on March 6, 2020.

As a lighting supervisor, Pytko’s job is to collaborate with the director of photography for lighting to help realize the director’s vision of the film, with the support of the story and art departments. Additionally, he helps guide the team of lighters to craft their shots while working closely with surrounding departments to put the world onscreen.
Presentations
Featured Sessions
Making of Pixar's Onward