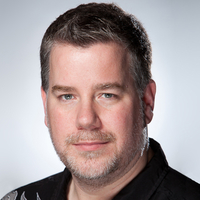 Biography
Guy has over twenty years experience in the visual effects industry and specialises in photo-real effects and creatures for live action film.
He came to New Zealand in 1999 to work on The Lord of the Rings trilogy. Since that time he has been Visual Effects Supervisor on Avatar, X-Men: First Class, The Hunger Games: Catching Fire as well as The Avengers and Iron Man 3, both of which earned him Academy® Award nominations for Best Visual Effects.

In his role as Visual Effects Supervisor, Guy has taken on the many facets the role requires including managing the pre-production, look development and pipeline setup phases to onset supervision and finally to post production and shot completion. He is an active member of the Academy of Motion Picture Arts and Sciences.

Guy's most recent films are Steven Spielberg’s adaptation of Roald Dahl’s classic The BFG and Guardians of the Galaxy Vol. 2. He is currently working on Ang Lee's Gemini Man.
Presentations
Featured Sessions
How Weta Digital Created Junior for Gemini Man for Gemini Man