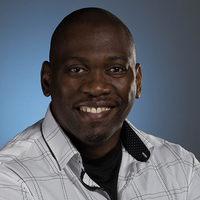 Biography
As an Animation Supervisor, Sidney ensures that the animation his team delivers is the best in the industry, whether it’s achieved through performance capture, keyframe animation, or a combination of both.
Sidney joined Weta Digital in 2015 as a Senior Animator on The Jungle Book and went on to work on War for the Planet of the Apes and Avengers: Infinity War as an Animation Supervisor.

Sidney has an Infographist degree from the Emile Cohl Art Academy. Outside work, he dedicates his time to building a CG education program for African youth.

Prior to Weta, Sidney worked at Framestore, London and Industrial Light and Magic. He was a Senior Animator on Alfonso Cuarón’s Oscar winning Gravity, and a Sequence Supervisor and Character Lead Animator for the majority of Rocket Raccoon’s shots in the first Guardians of the Galaxy. His credits also include The BFG, Avengers: Age of Ultron and Paddington, and he has recently wrapped on Avengers: Endgame.
Presentations
Featured Sessions
Staging the Endgame