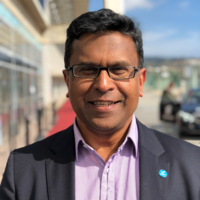 Biography
Channa Seneviratne is the Executive – Network and Infrastructure Engineering. Channa is responsible for the development, resilience and operation of our fixed, wireless and transport networks both domestically and internationally.

Channa has more than 30 years of experience in telecommunications networks having worked in both Operations and Engineering across both fixed and wireless technologies. During his time in Telstra, Channa has played key engineering design, support and operational roles as Telstra moved from being a start up in wireless through the evolutions of 2G, CDMA, 3G, 4G and now into readiness for 5G. More recently Channa led the launch of the world’s first commercial gigabit LTE network, the activation of Australia’s largest IoT footprint through our Cat M1 and Narrowband IoT technology and the beginning of our 5G network deployment.
Channa has a Bachelor of Engineering from the University of Queensland.