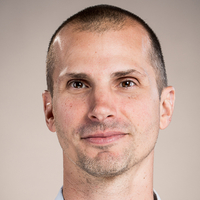 Biography
Keith joined Weta Digital in 2005 to work on Peter Jackson’s King Kong.
He plays a key role in the advancement of VFX techniques, combining high level visual-effects supervision with research and development.

Keith moved into a VFX Supervisor role after Avatar and has worked as a supervisor on The Adventures of Tintin, Iron Man 3, Man of Steel, Dawn of the Planet of the Apes, Batman v Superman: Dawn of Justice and The Jungle Book.