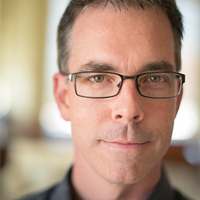 Biography
Rob Bredow is a strategic and visionary leader with a unique understanding of how media and innovation can join forces to tell great stories and create groundbreaking experiences. As SVP, Executive Creative Director and Head of Industrial Light & Magic, Bredow is responsible for the company’s overall creative strategy and global operations.

Most recently Bredow was the Visual Effects Supervisor and Co-Producer on Solo: A Star Wars Story. He served as a creative partner to the filmmakers throughout the production, from the earliest story meetings to the final frames of visual effects. He leveraged his background in innovative technology to help tell the story of the film, creating grounded images with a unique shooting style designed for the movie.

In his former role as Lucasfilm Chief Technology Officer, Bredow oversaw all technology development for Lucasfilm and ILM.

Bredow joined Lucasfilm in 2014 as Vice President of New Media and Head of Lucasfilm’s Advanced Development Group. He helped launch ILMxLAB in 2015 and co-wrote and directed Trials on Tatooine, a story-based virtual reality experiment created in collaboration with Lucasfilm’s Story Group, ILMxLAB and Skywalker Sound.

Previously, Bredow was CTO and Visual Effects Supervisor at Sony Pictures Imageworks. He has contributed as a supervisor on films such as Independence Day, Godzilla, Stuart Little, Cast Away, Surf’s Up, Cloudy With A Chance of Meatballs, and others.

Bredow is a member of the VFX Branch of Academy of Motion Pictures Arts & Sciences and the AMPAS Science and Technology Council.
Presentations
Featured Sessions
Star Wars: Over Four Decades of Storytelling with Innovation