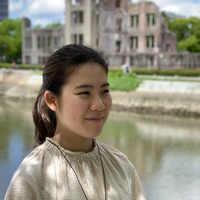 Biography
Anju Niwata was born in Hiroshima, Japan in 2001. When she was in the fifth grade, she learned about the “Nakajima district” in Hiroshima and became interested in "Inheriting the thoughts of A-Bomb survivors, hibakusha". In 2017, when collecting signatures in the Peace Memorial Park, she met Mr. Tokuso Hamai. This led to start "Rebooting Memories" project. She is working to inherit memories using new art and technology, such as a CG video and exhibitions of colorized photos. In 2018, she won the Student Award at the United For Peace Film Festival. She also co-released “Rebooting Memories" AR App.
Presentations
Art Papers
Art Talks
“Rebooting Memories”: Creating “Flow” and Inheriting Memories from Colorized Photographs