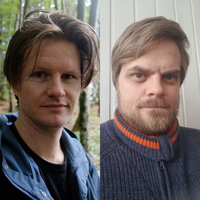 Biography
Since graduating from Volda in 2002 Atle has been involved with a number of animated feature film, VFX and TV-Series productions in Norway. But has also directed short films, most notable "Fishing With Sam"(2009) as well as art and animation director on "Bendik and the Monster"(2014).
Einar Dunsæd Founded Gimpville back in 2003, has since worked as director and animator at the company. Einar has a solid background from TV-series and film production, he was a central figure in the first Elias Productions.
Presentations
Computer Animation Festival - Animation Theater
DAD [SICAF2019 Award-Winning Program]