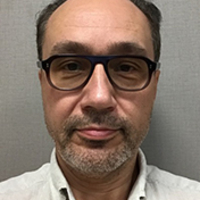 Biography
Dr. Alexei Sourin was born in Moscow and received his M.Eng. and Ph.D. degrees in computer graphics from the Moscow Engineering Physics Institute, Russia (MEPhI) in 1983 and 1988, respectively. From 1983 to 1993 he was a researcher at MEPhI where he worked on different scientific visualization and computer animation projects. Since 1993 he held faculty positions at Nanyang Technological University (NTU) in Singapore, except a period from 1999 to 2000 when he was Associate Professor at Moscow Institute of Physics and Technology (MIPT).
Presentations
Poster
Posters Gallery
[Visualization] Eye-Tracking Based Adaptive Parallel Coordinates