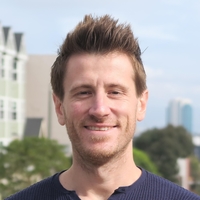 Biography
Pol Jeremias Vila is a Lead Graphics Engineer at Pixar Animation Studios where he develops algorithms to help artists make movies. Recently, his team created Hydra, Pixar's real-time rendering framework. Pol is credited in multiple movies including Toy Story 4, Incredibles 2 and Coco. Prior to Pixar, he worked in rendering technology for multiple games, such as Star Wars 1313.

In 2013, he co-founded Shadertoy.com, a website that enables artists, programmers, technical artists, and professors from all over the world to create and share rendering knowledge. Today, the Shadertoy.com has more than 30k publicly listed shaders created by thousands of contributors from more than 100 different countries.

Pol has spoken and juried work at multiple conferences around the world including SIGGRAPH, Game Developers Conference, SIGGRAPH Asia, FMX or Eurographics. Since 2012, he has been actively involved with SIGGRAPH, he directed the Computer Animation Festival, Real-Time Live!, and more recently, the Immersive program at SIGGRAPH 2018. Pol will be the Conference Chair of SIGGRAPH 2021 in Los Angeles.

He holds a Master's degree in Computer Science from the University of Southern California.
Presentations
Demoscene Talk
The Emergence of the Demoscene: Ziggy