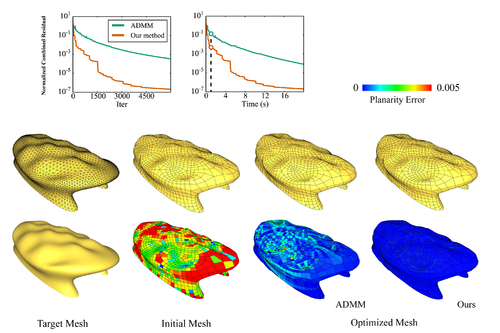 LocationGreat Hall 1&2
DescriptionThe alternating direction method of multipliers (ADMM) is a popular method for solving optimization problems that are potentially non-smooth and with hard constraints. It has been applied to various computer graphics applications including physics simulation, geometry processing, and image processing. However, ADMM can take a long time to converge to a solution of high accuracy. Moreover, many computer graphics tasks involve non-convex optimization problems, and there is often no convergence guarantee for ADMM on such problems since it was originally designed for convex optimization. In this paper, we propose a method to speed up ADMM using Anderson acceleration, which is an established technique to accelerate a fixed-point iteration. We show that in the general case, ADMM is a fixed-point iteration of the second primal variable and the dual variable, and Anderson acceleration can be directly applied. Additionally, when the problem has a separable target function and satisfies certain conditions, ADMM becomes a fixed-point iteration of only one variable, which further reduces the computational overhead of Anderson acceleration. Moreover, we analyze a particular non-convex problem structure that is commonly used in computer graphics, and prove the convergence of ADMM on such problem under mild assumptions. We apply our acceleration technique on a variety of optimization problems in computer graphics, with notable improvement on their convergence speed.
Authors
Juyong Zhang
University of Science and Technology of China
Yue Peng
University of Science and Technology of China
Wenqing Ouyang
University of Science and Technology of China
Bailin Deng
Cardiff University
Back to top