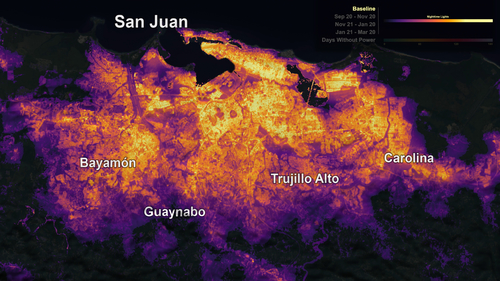 In the days, weeks and months that followed, NASA researchers developed neighborhood-scale maps of lighting in communities across Puerto Rico. To do this, they combined satellite data of Earth at night from the NASA/NOAA Suomi National Polar-orbiting Partnership satellite with USGS/NASA Landsat data and OpenStreetMap data. They monitored where and when the electricity grid was restored, and analyzed the demographics and physical attributes of neighborhoods longest affected by the power outages. Power failures across Puerto Rico’s rural communities accounted for 61 percent of the estimated cost of 3.9 billion customer-interruption hours, six months after Hurricane Maria. These regions are primarily rural in the mountainous interior of the island where residents were without power for over 120 days. However, even more heavily populated areas had variable recovery rates between neighborhoods, with suburbs often lagging behind urban centers. The absence of electricity as seen in the night lights data offers a new way to visualize storm impacts to vulnerable communities across the entirety of Puerto Rico on a daily basis.
Contributor